Mr Hyde in the comic books

Posted by Smiling Dave
You know by now to go to the first post to find out who Mr Hyde is.

1. Of course, the Thing, member of the Fantastic Four, has a huge Mr Hyde inside him. He's always making remarks about how ugly he is, how nobody loves him, etc. And this despite women running over to kiss him, etc.

2. I was stirred by these four squares where we are introduced to Quasimodo, a computer that has developed feelings. 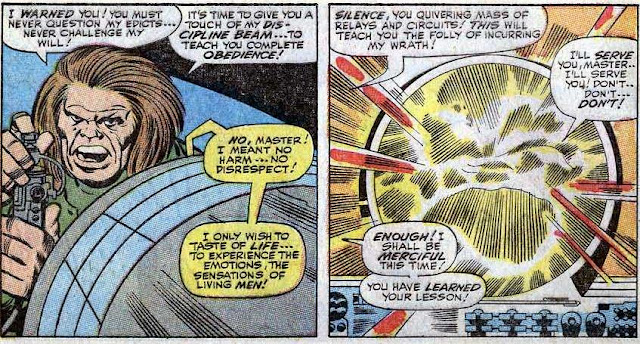 Many little kids are turned into unfeeling playing dumb machines, who must stifle their insights and emotions, by their surroundings. His emotions may be just so painful the kid has to shut down, or his insights into what's really going on in his family life may make him play dumb, even to himself.

Sometimes he is actively encouraged to be stupid and unfeeling by those with power over him.

Those four squares show the kid, now grown up perhaps, struggling to break out of his prison, to feel and think for himself again.

But Mr Hyde is right there to stop that kind of dangerous nonsense. "You are a machine, and a machine you shall remain." He then zaps Jeckyl with some discipline to teach him complete obedience. Jeckyl gives in.

As Dr Rubin writes, it takes great heroism to fight Mr Hyde. The Quasimodo character in the comic book didn't fight back. Perhaps he thought it was hopeless, not having read Dr Rubin's book or this humble blog.