The Soak the Rich Solution

Our Fearless Leader, President Obama, really loves this one. Of course, since everyone realizes on some gut level that it is wrong to steal, the double talk has to cover it up with talking about having the rich give "their fair share".

We're not going to go into the fairness of taking from the rich, nor whether the rich are already giving more than their fair share, nor whether there are enough rich people out there to support all our needs. Our question will be an amoral one, purely economic. Is it true that just as eating a duck is bad for the duck, but good for the human, so too soaking the rich may be bad for the rich, but good for the rest of us?

We already discussed in this little post how moving money from one person to another doesn't "create jobs" or improve the economy as a whole. Now we will talk about a seemingly surprising thing, that robbing from the rich to give to the poor, is very bad for a modern economy. And the ones who will suffer most from it are the poor.

But wait. Here comes Devils' Advocate again. The guy should get a byline on these blogs.

DA: Are you telling me that Robin Hood did the wrong thing?

SD: Robin Hood didn't rob from the rich. He robbed from the govt, who had extorted money from the poor by force of arms. Sheriff of Nottingham and so forth.

DA: OK, but still, why shouldn't the poor get a bigger slice of the pie?  Let's rob from the rich.

SD: Do you think it better that the poor get a slice of one pie, or of ten pies?

DA: There is only one pie, isn't there? 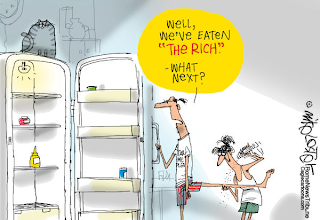 SD: Right now there is only one. But if you let the rich keep their honestly earned money, what will they do with it?

DA: They certainly won't spend it all, as the politicians are quick to point out.

SD: So they will hide it under the mattress?

SD: We both know it's going to be in a bank account. Which means the bank will lend it to someone, a businessman who will use it to grow his business and make it more profitable. Meaning he will both create new jobs and provide more goods and services, which is exactly the wealth of a nation.

DA: In other words, he will be baking ten more pies from which everyone to get more slices.